Showcasing the best in Cambodian cinema from around the world, this year’s festival is a free virtual forum, including films and special events. Filmmaker Arthur Dong will be a featured panelist for Stories We Didn’t Learn in School, streaming September 20, 6:30pm PST. 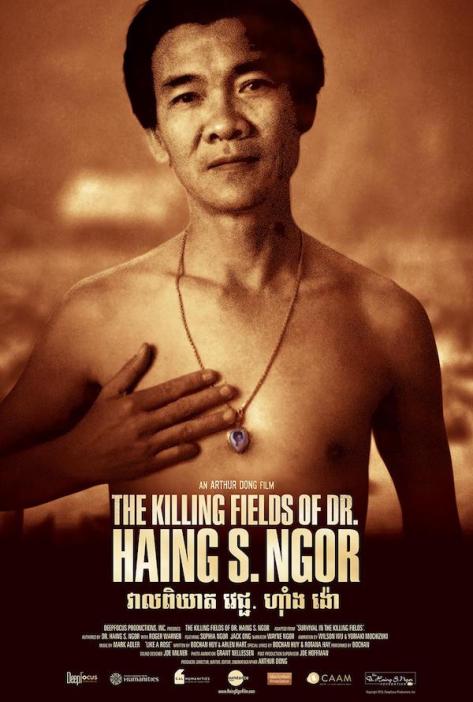 The Killing Fields of Dr. Haing S. Ngor chronicles the life, times and murder of Dr. Ngor, who remains the only Asian male to have won an Academy Award® for best supporting actor. When the Chinese-Cambodian doctor was forced into labor camps by the Khmer Rouge, little did he know he would escape four years of torture and be called upon to recreate his experiences in a film that propelled him into the glamorous world of Hollywood. And little did anyone know that some twenty years later, Dr. Ngor would be gunned down in a Los Angeles Chinatown alley. How could it be that he would survive the tyranny of the Khmer Rouge, only to be murdered by gang-bangers in America?

Featuring a discussion with filmmakers Chris Lockett (Until They’re Gone), Arthur Dong (The Killing Fields of Dr. Haing S. Ngor), James Taing (Ghost Mountain), and Rithy Hanh (In The Life of Music). Join us as we discuss the stories that weren’t taught in schools. Hosted by Shawna Lesseur.

Arthur Dong’s award-winning documentary The Killing Fields of Dr. Haing S. Ngor is the Centerpiece film of the Boston Asian American Film Festival on Saturday, October 24, 2015, and will screen at the Paramount Theater in the Bright Family Screening Room, 559 Washington Street in Boston, MA. at 6:15pm. Dong will be in attendance for a Q & A after the screening.

Regular tickets: $10; AARW/ArtsEmerson Members: $7.50, accessed via Promo Code, Student/Children: $5, must present ID at box office when picking up, Seniors: $7.50, and can be purchased by clicking here.

Set against the backdrop of Cambodia’s Khmer Rouge reign of terror, The Killing Fields of Dr. Haing S. Ngor chronicles a powerful journey of love, loss and reconciliation. The years encapsulating this horrific period are seen through the eyes of Dr. Haing S. Ngor, who escaped to America and recreated his experiences in The Killing Fields, winning an Oscar® for his first film. He became the de facto worldwide ambassador for truth and justice in his homeland, only to be gunned down in an alley in Chinatown Los Angeles – a case still surrounded by transnational conspiracy theories.

The Killing Fields of Dr. Haing S. Ngor, winner of the BEST DOCUMENTARY AUDIENCE AWARD at the Los Angeles Asian Pacific Film Festival, builds on ARTHUR DONG’S 30-year track record of creating compelling documentaries that focus on personal stories to examine moments of history, social prejudice, and public policy concerns. As a film student at San Francisco State University, Arthur Dong produced Sewing Woman, his Academy Award nominated short documentary in 1984. The film focused on his mother’s immigration to America from China. Instead of finding an outside distributor for the film, Dong then started his own company, DeepFocus Productions, and serves as its producer, director and writer. His trilogy of films that investigate anti-gay prejudice were released in the DVD collection, “Stories from the War on Homosexuality,” and features Family Fundamentals, Licensed to Kill and Coming Out Under Fire. His films about Chinese Americans were released in the follow-up collection, “Stories from Chinese America,” and include Sewing Woman, Forbidden City, U.S.A. and Hollywood Chinese.

His films have screened theatrically in the U.S., selected for festivals worldwide like Sundance, Toronto, and Berlin, and broadcast globally. Arthur’s film awards include an Oscar® nomination, three Sundance awards, the Peabody, five Emmy nominations, the Berlin Film Festival’s Teddy Award, Taiwan’s Golden Horse Award, and two GLAAD Media awards. He has been named a Guggenheim Fellow in Film and twice selected for the Rockefeller Media Arts Fellowship. He has served on the boards of the Academy of Motion Picture Arts and Sciences, Film Independent, Outfest, and the National Film Preservation Board at the Library of Congress.

Arthur Dong’s new book Forbidden City, USA: Chinese American Nightclubs, 1936-1970 is among this year’s winners of the Thirty-Sixth Annual American Book Awards, presented by the Before Columbus Foundation. The 2015 American Book Award winners will be formally recognized on Sunday, October 25th from 2:00-5:00 p.m. at the SF Jazz Center, Joe Henderson Lab, 201 Franklin Street (at Fell), San Francisco, CA. This event is open to the public.

The book was launched in coordination with his exhibit of the same name at the San Francisco Main Library. It has just been released in a glorious edition and can be purchased here.

Lia Chang is an award-winning filmmaker, a Best Actress nominee, a photographer, and an award-winning multi-platform journalist. Lia has appeared in the films Wolf, New Jack City, A Kiss Before Dying, King of New York, Big Trouble in Little China, The Last Dragon, Taxman and Hide and Seek, which will screen at the Philadelphia Asian American Film Festival on November 21st. She is profiled in FebOne1960.com Blog, Jade Magazine and Playbill.com.

All text, graphics, articles & photographs: © 2000-2015 Lia Chang Multimedia unless otherwise indicated. All rights reserved. All materials contained on this site are protected by United States copyright law and may not be reproduced, distributed, transmitted, displayed, published or broadcast without the prior written permission of Lia Chang. You may not alter or remove any trademark, copyright or other notice from copies of the content. For permission, please contact Lia at liachangpr@gmail.com