On July 9, Erin Quill moderated a terrific AAPI Writer’s panel at BroadwayCon called Writing Our Way Out: writing our own stories, in the New Yorker Hotel – Grammercy Park Suite.

The panel featured Playwright Daniel K. Isaac (ONCE UPON A (korean) TIME),  Director Ralph B. Peña and Composer/Lyricist Helen Park (KPOP, Over the Moon), who discussed writing pieces for those who do not fall into the traditional categories of how America sees leading roles.

Erin Quill shared, “These people, all three of them, have taken it upon themselves to incorporate into their work not only social justice, but stories for people to tell that are not White America.”

Click on the link below to watch the panel and a trailer for Ma-Yi Theater’s World Premiere of Daniel K. Isaac’s ONCE UPON A (korean) TIME, currently having a limited run at La MaMa’s Ellen Stewart Theatre through September 18.

Playwright Daniel K. Isaac is an alumnus of SPACE on Ryder Farm, Page73’s Interstate 73, Ensemble Studio Theatre’s Youngblood, and a Lambda Literary Playwriting Fellow. His play, Once Upon a (korean) Time opened on August 31 at La MaMa, produced by the Ma Yi Theater Company, and has a limited run through September 18. Click here for tickets.

Late Night with Playwright Daniel K. Isaac – Opening Night of Ma-Yi’s World Premiere of ONCE UPON A (korean) TIME

Helen Park is a three-time Drama Desk nominee and recipient of the Lucille Lortel Award for Best Musical and the Richard Rodgers Award. Her music has been described as “perversely addictive” (New York Times) and “infectious” (Hollywood Reporter).

Park wrote music and lyrics as well as orchestrated the score for the upcoming Broadway musical KPOP, which begins previews at Circle in the Square on October 13. The initial Off-Broadway production of the show received a sold-out, extended run at Ars Nova, and was the most nominated show of the 2017-2018 season. Other notable work include Over the Moon, an Oscar-nominated Netflix Original Animated Feature musical film directed by Academy Award winner Glen Keane, for which she wrote songs. Park recently debuted a song she wrote for Sesame Street the Musical at her 54 Below concert, and the show is set to open this fall. Park also wrote music for the one-act musical Baked Goods for which she won the 2018 Samuel French Short Playwriting Contest. Park is an alumnus of NYU’s Graduate Musical Theatre Writing Program and the BMI Lehman Engel Advanced Musical Theater Workshop, and is a member of the Dramatists Guild. 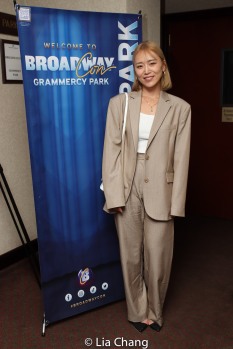 Ralph B. Peña is a Playwright and a Director whose list of accomplishments in both is vast. He is an advocate as well as the Producing Artistic Director of Ma-Yi Theater Company, which holds OBIE and Drama Desk Awards to their credit. Recent directing projects include Lloyd Suh’s The Chinese Lady at The Public Theater, Felix Starro, Among The Dead, ONCE UPON A (korean) TIME (at La MaMa through Sept. 18), and the short film Vancouver. His work has been seen on the stages of The Public Theater, Long Wharf Theater, Ensemble Studio Theater, Victory Gardens, La Jolla Playhouse, Laguna Playhouse, and The Children’s Theater Company, among others. He is the recipient of an Obie Award for his work on The Romance of Magno Rubio. As a playwright he wrote FLIPZOIDS, This End Up, and Loose Leaf Bindings.

Erin Quill is a graduate of CMU. She is an original Broadway cast member of Avenue Q. She has also been seen in the 50th Anniversary Production of Flower Drum Song as Madame Rita Liang and on tour in The King and I as Lady Thiang. She was in the Arena Stage production of DAVE, directed by Tina Landau. Her TV credits include: “John Mulaney and the Sacklunch Bunch,” “The Blacklist,” “The Other Two,” “Nurse Jackie,” “NYPD Blue,” and many more. As a writer, she is best known for her blog, The Fairy Princess Diaries, which champions inclusion and challenges theatrical norms. Check out all of Erin’s programming at BroadwayCon here.

Lia Chang is an actor, a multi-media content producer and co-founder of Bev’s Girl Films, making films that foster inclusion and diversity on both sides of the camera.  BACKSTAGE PASS with Lia Chang, executive produced and hosted by Lia, will air on Sundays at 3:30 pm (PST)/6:30 pm (EST) on FIOS 34, RCN 83, Spectrum 56/1996 and MNN 2 .

Bev’s Girl Films’ debut short film, Hide and Seek was a top ten film in the Asian American Film Lab’s 2015 72 Hour Shootout Filmmaking Competition, and she received a Best Actress nomination. BGF collaborates with and produces multi-media content for artists, actors, designers, theatrical productions, composers,  musicians and corporations. Lia has appeared in the films Wolf, New Jack City, A Kiss Before Dying, King of New York, Big Trouble in Little China, The Last Dragon, Taxman. She stars in and served as Executive Producer for the short independent films Hide and Seek, Balancing Act, Rom-Com Gone Wrong, Belongingness and When the World was Young. She is also the Executive Producer for The Cactus, The Language Lesson, The Writer and Cream and 2 Shugahs.

All text, graphics, articles & photographs: © 2000-2022 Lia Chang Multimedia. All rights reserved. All materials contained on this site are protected by United States copyright law and may not be reproduced, distributed, transmitted, displayed, published or broadcast without the prior written permission of Lia Chang. You may not alter or remove any trademark, copyright or other notice from copies of the content. For permission, please contact Lia at backstagepasswithliachang@gmail.com.

Gold Open has partnered with the Coalition of Asian Pacifics in Entertainment CAPE to launch the inaugural Gold List which honors the most outstanding Asian and Pacific Islander (API) achievements in film each year. Gold Open is part of Gold House, which bolsters multicultural movies to box office success — most notably, the movement brought shine to Parasite and Crazy Rich Asians.

Featuring 10 categories, Gold List is voted on by the Gold Open Advisory Council, Gold House Members (the premier nonprofit collective of leading API creatives, executives, and founders), CAPE Board Members and Advisors (the premier API-entertainment nonprofit), and other entertainment leaders. Future Gold Lists will endeavor to include additional categories and communities.

Gold House and CAPE have hosted conversations with various Gold List honorees which can be watched here.  Please view the honorees’ pages below for these conversations, and subscribe and follow here for future announcements.

Best Picture
Minari and Sound of Metal Honorable Mentions: The Half of It, The White Tiger, Yellow Rose 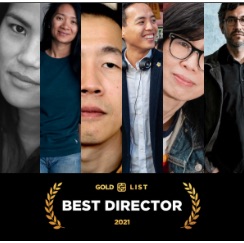 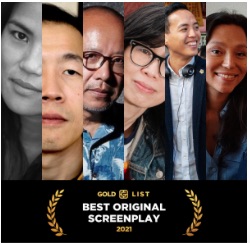 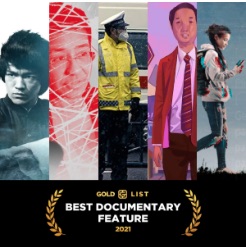 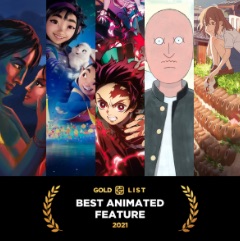