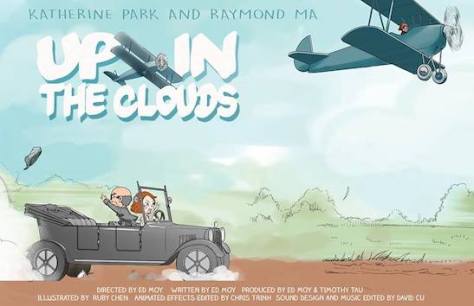 Up in the Clouds, a delightful animated short written and directed by Ed Moy, and featuring the voices of Katherine Park (Red Dress) and Raymond Ma (The Muppets, Horrible Bosses 2, and Lethal Weapon 4), is an Official Selection of the 2016 Cayfilm Cayman International Film Festival. Up in the Clouds will have its International Premiere screening during the Animated Film block Sunday, July 3, 2016, from 10:00am – 11:15am in the Ritz-Carlton Ballroom 1 at the Ritz-Carlton Grand Cayman. Click here for more information and to purchase tickets.

Up in the Clouds is an Asians on Film Festival Summer Quarter 2015 Winner for Best Animation.

Q & A with Ed Moy, Filmmaker of AVIATRIX: THE KATHERINE SUI FUN CHEUNG STORY and UP IN THE CLOUDS; both films screen at the 2016 Sacramento Asian Pacific Film Festival on May 27

Produced by Ed Moy and Timothy Tau, the inspiration for Up in the Clouds is Chinese aviatrix Katherine Sui Fun Cheung, who became one of the first Chinese women pilots to earn a license to fly in the United States.

Cheung is honored with a plaque at LAX’s Flight Path as the first licensed Asian Aviatrix in the United States, recognized with a plaque at the San Diego Air & Space Museum, Disney’s Soarin’ over California and in the Smithsonian.

Up in the Clouds was originally conceived as black and white animatic style sketches illustrating Katherine’s story of falling in love with flying while learning to drive a car with her dad next to a dusty airfield in Los Angeles.

Edmund Moy (director, producer, writer)
Ed Moy is an award-winning journalist. His series of feature news articles about the Leukemia & Lymphoma Society’s Team in Training fundraising programs helped raise awareness for their mission while touching the lives of thousands of readers and earned him their National Print Media Award for Excellence in Journalism.

Moy is currently working on an Aviatrix documentary film and web series project about Chinese women aviators of the 1930s, which will screen at the 2016 Long Beach Indie International Film, Media, and Music Festival (August 31-September 4, 2016) in Long Beach, CA. He was also co-writer on director Timothy Tau’s award-winning short film Keye Luke about the life of pioneering Asian American actor Keye Luke. It won an Audience Award at the 2014 Hollyshorts Film Festival and was nominated for Best Short Film at the 2013 Dragon*Con Short Film Fest. http://www.aviatrixmovie.org

David Cu (editor, sound editor)
David Cu is a  composer, sound designer, and editor for film, television, games, and more. He studied at the Academy of Art University in San Francisco for Music Production & Sound Design for Visual Media.