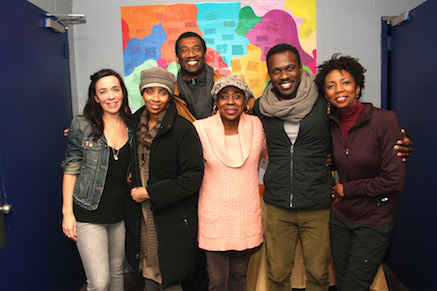 For most of the Sunday matinee of Colman Domingo’s new heartbreakingly funny play DOT at the Vineyard Theatre, starring  Marjorie Johnson, Sharon Washington, Colin Hanlon, Stephen Conrad Moore, Libya V. Pugh, Michael Rosen and Finnerty Steeves, I was on the verge of laughter and tears. 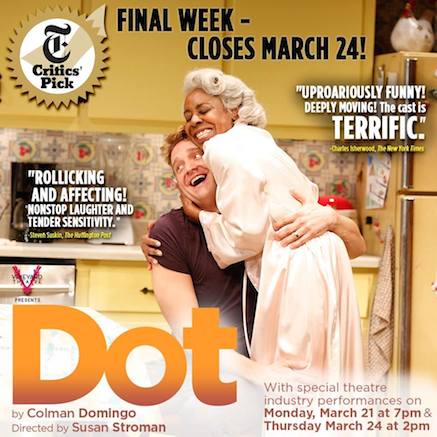 In DOT, the holidays are always a wild family affair at the Shealy house. But this year, Dotty (Marjorie Johnson) and her three grown children, Shelly (Sharon Washington), Donnie (Stephen Conrad Moore), Averie (Libya V. Pugh)  gather for the holidays with more than exchanging presents on their minds. As Dotty struggles to hold on to her memory, her children fight to balance care for their mother and care for themselves.

Kudos to the terrific cast and creative team for telling this very relevant, relatable and timely story.

I have first hand experience with Dementia and Alzheimer in my family, having witnessed the decline of my beloved feisty grandmother, Nancy Lee Chang. At 80 years of age, she was independent, self-sufficient, vital, strong as an ox and still going to the gym everyday, but after the unexpected death of my mother in 1999 and injuries related to being hit by a car, she began to change. Over the course of the play, I was in tears numerous times because of the all too familiar drama unfolding onstage.

Coming to America through The Angel Island Immigration Station

On Tuesday, March 22nd, DOT director Susan Stroman will be joined by Tony Award-winning actor and advocate David Hyde Pierce (Vineyard’s THE LANDING, director of Broadway’s IT SHOULDA BEEN YOU) for a discussion of themes raised by the play following the 7pm performance of DOT. Pierce has worked with The Alzheimer’s Association for nearly twenty years as a board member and national spokesperson. He has testified before Congress and served on the federal Advisory Council on Alzheimer’s Research, Care, and Services, providing guidance to the Secretary of Health and Human Services. In 2010, he was awarded the Tony Awards’ Isabelle Stevenson Award for his work in the fight against Alzheimer’s disease.

WHAT THE CRITICS ARE SAYING ABOUT DOT:

A thoroughly entertaining comedy-drama, an impressive advance for Colman Domingo. Dotty is played with glowing warmth and sensitivity by Marjorie Johnson. THE CAST IS TERRIFIC.” – Charles Isherwood, The New York Times

“‘DOT’ IS DISARMINGLY FUNNY AND MOST REWARDING!

“‘DOT’ IS ROLLICKING AND AFFECTING!

VERY FUNNY, VERY MOVING AND PROPELLED BY A WONDERFUL TEAM OF ACTORS.

“A MAGNIFICENT NEW PLAY! FULL OF LAUGHTER AND HEARTBREAK.

The actors knock it out of the park. Marjorie Johnson astounds us with her performance. Stephen Conrad Moore and Colin Hanlon are masters. Libya V. Pugh is just plain fun as Averie. Colman Domingo tackles the subject with intelligence, heart and humor. A CAPTIVATING PRODUCTION!” – Zachary Stewart,TheaterMania

Colman Domingo is in his finest form yet as a playwright.” – Matthew Murray, Talkin’ Broadway

Lia Chang is an award-winning filmmaker, a Best Actress nominee, a photographer, and an award-winning multi-platform journalist. Lia has appeared in the films Wolf, New Jack City, A Kiss Before Dying, King of New York, Big Trouble in Little China, The Last Dragon, Taxman and Hide and Seek, which will screen at the Disorient Film Festival in Eugene Oregon in April. She is profiled in Examiner.com, Jade Magazine and Playbill.com.