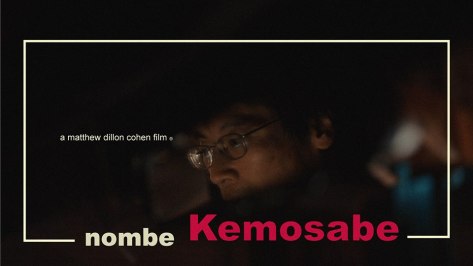 In December, I had the best time working with filmmaker Matthew Dillon Cohen and his crew on NoMBe’s Kemosabe music video, which will premiere as part of the Little Lantern Film Screening on Wednesday, February 24, 2016, in the Pangea Restaurant Private Screening Room, 178 2nd Ave in New York. The evening begins at 6:00PM, and the screening starts at 7:00PM.

NoMBe’s new single, Kemosabe will appear on his forthcoming sophomore EP Mood Indigo, along with Miss California and Miss Mirage.

For someone managing to fuse IDM, Indie and Soul so seamlessly into danceable beats and catchy melodies, 23 year old Noah McBeth (alias NoMBe) has kept a low profile on the LA music radar. A native of Heidelberg, Germany, the classical pianist turned producer wears the many hats of composer, singer/songwriter & engineer effortlessly.

NoMBe continues to make use of a wide range of obscure samples while leaving his own signature with a unique vocal sound, ranging from a strong bluesy tone to a chilly sweet falsetto.

His lyrics touch on topics like shady women, drunk uncles and loose morals, sticking to only the most delightful things. Since moving to Los Angeles from NYC in 2013, NoMBe has produced a number of up and coming artists while finishing up his own releases, making it his mission to take today’s world of “genre-less” music by storm.

Matthew Dillon Cohen is a New York based producer/director. Matthew’s creative career began in photography, and moved more toward film when he started making music videos for his musician friends. Today Matthew focus’s on narrative, commercial and documentary work.

Lia Chang is an award-winning filmmaker, a Best Actress nominee, a photographer, and an award-winning multi-platform journalist. Lia has appeared in the films Wolf, New Jack City, A Kiss Before Dying, King of New York, Big Trouble in Little China, The Last Dragon, Taxman and Hide and Seek, which will screen at the Philadelphia Asian American Film Festival on November 21st. She is profiled in Examiner.com, FebOne1960.com Blog, Jade Magazine and Playbill.com.