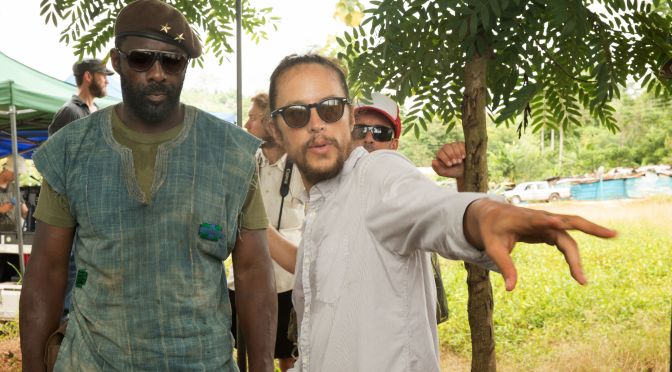 Beasts of No Nation is based on the highly acclaimed novel by Nigerian author Uzodinma Iweala, bringing to life the gripping tale of Agu, a child soldier torn from his family to fight in the civil war of an African country. Newcomer Abraham Attah gives a stunning portrayal of Agu, while Idris Elba dominates the screen in the role of Commandant, a warlord who takes in Agu and instructs him in the ways of war.

Cary Joji Fukunaga is an Emmy Award-winning director, writer, and cinematographer who created and directed the HBO show True Detective, starring Matthew McConaughey and Woody Harrelson. At the 2014 Emmy Awards he was awarded Outstanding Director for a Drama Series for his work on the show.

Fukunaga’s first film, Sin Nombre, was critically acclaimed and catapulted him into the limelight as a director to watch.  The film, which he wrote and directed, was a thriller about the collision of a gang member on the run from his violent past and a Honduran teenager traveling with her family through Mexico in hopes of finding a better life in the U.S. It premiered in dramatic competition at the Sundance Film Festival, where it won the U.S. Dramatic Directing Award and the U.S. Dramatic Excellence in Cinematography Award.

Jane Eyre followed Sin Nombre. Starring Michael Fassbender and Mia Wasikowska the film was critically acclaimed and was nominated at both the BAFTA and Academy Awards.

Fukunaga launched his career as a second-year NYU Film School student with the short, Victoria Para Chino, which screened at the 2005 Sundance Film Festival and went on to earn more than two dozen international awards, including the Silver Medal at the Student Academy Awards and an honourable mention from BAFTA’s Los Angeles chapter.

His first commercial was a moving :60 piece for the Levi’s Go Forth campaign. Working closely with W+K, Portland, Cary tapped into the unbendable reputation of the Levi’s brand, the optimism of a generation recharged by recent political change, and the authority of an American icon to create the award-winning spot.

This was followed by the launch film for the Sony PS Vita The World is in Play campaign.  Another beautifully crafted piece, it embraced the metaphor of gamers interacting with the world around them and each other.

The California native is an M.F.A. candidate from New York University’s Graduate Film Program, and a graduate of the University of California, Santa Cruz.

ABOUT THE FILM INDEPENDENT SPIRIT AWARDS
Now in its 31st year, the Film Independent Spirit Awards is an annual celebration honoring artist-driven films made with an economy of means by filmmakers whose films embody independence and originality. The Spirit Awards recognizes the achievements of American independent filmmakers and promotes the finest independent films of the year to a wider audience.

The winners of the Spirit Awards are voted upon by Film Independent and IFP Members. Awards are given in the following categories: Best Feature, Best First Feature, Best First Screenplay, Best Director, Best Screenplay, John Cassavetes Award (given to the best feature made for a budget under $500,000), Best Male Lead, Best Female Lead, Best Supporting Male, Best Supporting Female, Best Cinematography, Best Editing, Best International Film and Best Documentary. The Filmmaker Grants include the Piaget Producers Award, the Kiehl’s Someone to Watch Award and the Truer Than Fiction Award. The Film Independent Spirit Awards are sponsored by Premier Sponsors Piaget, Bank of America, Heineken, American Airlines, Jaguar and IFC. FIJI Water is the Official Water of the 2016 Spirit Awards. WireImage is the Official Photographer of Film Independent.

ABOUT FILM INDEPENDENT
Film Independent is a nonprofit arts organization that champions independent film and supports a community of artists who embody diversity, innovation and uniqueness of vision. Film Independent helps filmmakers make their movies, builds an audience for their projects, and works to diversify the film industry. Film Independent’s Board of Directors, filmmakers, staff and constituents is comprised of an inclusive community of individuals across ability, age, ethnicity, gender, race and sexual orientation. Anyone passionate about film can become a Member, whether you are a filmmaker, industry professional or a film lover.

For more information or to become a Member, visit filmindependent.org/membership.

ABOUT IFC
IFC is the home of offbeat, unexpected comedies. Series like Portlandia, Documentary Now!, Maron and Comedy Bang! Bang! air alongside fan-favorite movies and comedic cult TV shows. IFC is owned and operated by AMC Networks Inc., and available across multiple platforms. IFC is Always On Slightly Off.

Lia Chang is an award-winning filmmaker, a Best Actress nominee, a photographer, and an award-winning multi-platform journalist. Lia has appeared in the films Wolf, New Jack City, A Kiss Before Dying, King of New York, Big Trouble in Little China, The Last Dragon, Taxman and Hide and Seek. She is profiled in Examiner.com, Jade Magazine and Playbill.com.

All text, graphics, articles & photographs: © 2000-2015 Lia Chang Multimedia. All rights reserved. All materials contained on this site are protected by United States copyright law and may not be reproduced, distributed, transmitted, displayed, published or broadcast without the prior written permission of Lia Chang. You may not alter or remove any trademark, copyright or other notice from copies of the content. For permission, please contact Lia at lia@liachang.com