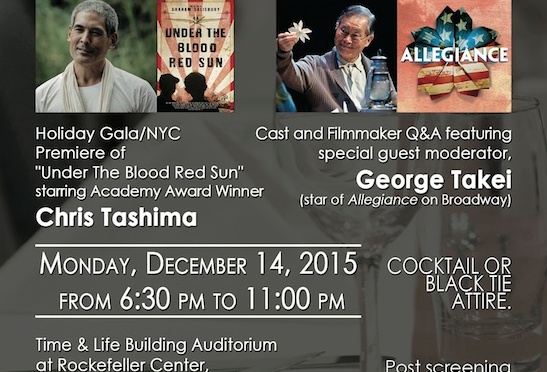 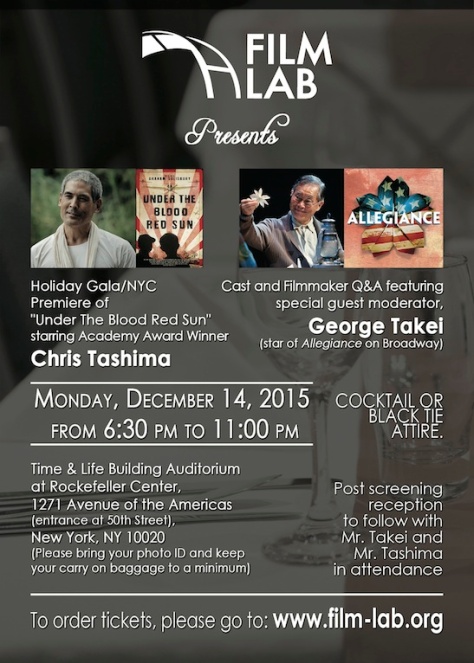 On Monday, December 14th, the 3rd annual Film Lab benefit holiday gala will feature the NYC Premiere of Tim Savage’s Under The Blood Red Sun, starring Academy Award winner Chris Tashima, at the Time & Life Building at Rockefeller Center, 1271 Avenue of the Americas (at 50th St.)  in New York City. The screening will be followed by a Q&A with the cast, moderated by Star Trek and Allegiance star George Takei. The black tie evening kicks off at 6:30pm.

Under The Blood Red Sun, starring Chris Tashima, Kyler Sakamoto, Kalama Epstein, Dann Seki, Autumn Ogawa, Will Kahele and Mina Kohara, is based on the bestselling novel of the same title by Graham Salisbury, and details the life of Tomi––a Japanese American boy whose family was sent to the internment camp during World War II.

George Takei is well known by fans for his role in Star Trek, along with the decades of advocacy work within the Asian American and LGBT community. His starring role in the Broadway musical Allegiance, opposite Tony winner Lea Salonga, Telly Leung and Michael K. Lee, is his latest professional endeavor. Guests will also be invited to join the Film Lab for the post-screening reception and will have the opportunity to share food and drink with the cast and Mr. Takei himself.

“Film Lab is delighted to have Mr. Takei as our special guest. There are many similarities between Allegiance and the film, Under The Blood Red Sun, which is why we believe this year’s event is special,” notes Nick Sakai, the event organizer and Film Lab’s Industry Spotlight Coordinator.  Film Lab’s President, actor Jennifer Betit Yen adds, “We encourage everyone to come and mingle with the cast and Mr. Takei while supporting the gender and ethnic diversity in American film and television programming.”

Tickets for the event are currently on sale ranging from $40 for SAG-AFTRA members to $200 for VIP tickets with free entry for media. VIP ticket holders will receive a private meet and greet with George Takei and Chris Tashima (star of Under The Blood Red Sun), priority seating at the screening, and guaranteed table seats at the post-screening reception. Seats are limited for the event. To purchase tickets for the event visit:http://www.eventbrite.com/e/film-lab-holiday-galanyc-prem….

Ticket Information:
VIP tickets
In addition to what is included for regular tickets, VIP ticket holders will enjoy a pre screening meet & greet with George Takei and Chris Tashima (star of Under The Blood Red Sun), priority seating at the screening and guaranteed table seats at the post screening reception. $200 ONLY 50 seats available so please reserve ASAP.

Starving Artist tickets
Same benefits as Regular Tickets for those who have donate time and talent to the Film Lab community and who have established financial hardship. Subject to verification. $60 Discount code required. **Please be sure to obtain advance verification from Nick Sakai before ordering this ticket type. Thank you.**

SAG-AFTRA tickets
SAG-AFTRA members: Same benefits as Regular Tickets. Max 3 tickets per person and the purchaser must check in with paid-up SAG-AFTRA card along with the picture ID. Guests can be non-members but must accompany the purchaser at check in. $40

All tickets sales will go towards diversity in media initiatives.  These much needed donations will go towards providing free or low-cost programming that includes screenwriting workshops, panels, seminars and screenings and are tax-deductible to the fullest extent of the law.

About the Organization:
Founded in 1998, The Film Lab is a not-for-profit corporation with members across the globe consisting of diverse filmmakers, directors, producers, writers, editors, actors, and crew members. The organization provides monthly programs to support gender and ethnic diversity in film and television. The Film Lab, a  501(c)(3) charity, works to promote education and support ethnic and gender diversity in films and television through a series of programs and events that include Unfinished Works, a program for writers; Industry Spotlight, a program for filmmakers; Connections, a networking arm that encompasses the Film Lab’s famous 72-Hour Shootout filmmaking competition and the Lab’s Annual Holiday Gala; and AAFL TV, the Lab’s production arm.  The Film Lab is currently in pre production on psychological drama involving elder abuse.  Read more at www.TheOppositeofaFairyTale.com.

To learn more about the organization, please visit: www.film-lab.org.

The AsAmFilmLab is a not-for-profit organization dedicated to the support and promotion of gender and ethnic diversity in film and television. We are committed to challenging our membership to continually strive to be better through education, outreach and networking.

Lia Chang is an award-winning filmmaker, a Best Actress nominee, a photographer, and an award-winning multi-platform journalist. Lia has appeared in the films Wolf, New Jack City, A Kiss Before Dying, King of New York, Big Trouble in Little China, The Last Dragon, Taxman and Hide and Seek, which will screen at the Philadelphia Asian American Film Festival on November 21st. She is profiled in Examiner.com, FebOne1960.com Blog, Jade Magazine and Playbill.com.

All text, graphics, articles & photographs: © 2000-2015 Lia Chang Multimedia. All rights reserved. All materials contained on this site are protected by United States copyright law and may not be reproduced, distributed, transmitted, displayed, published or broadcast without the prior written permission of Lia Chang. You may not alter or remove any trademark, copyright or other notice from copies of the content. For permission, please contact Lia at lia@liachangphotography.com